Last summer, we tested out a new gender-expansive cabin option at Friends Camp in addition to our girls’ and boys’ cabins. As a Quaker camp, we affirm our campers and families of all identities—this means we work hard to affirm every camper for who they are when it comes to family background, racial identity, religious beliefs, gender identity, and more. After the successful implementation of this option in 2018, we will be offering a gender-expansive cabin option whenever there is enough interest going forward. 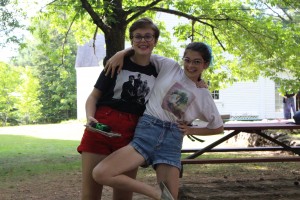 We are proud to be a camp for kids of all genders, where campers are free to make platonic friendships with others regardless of gender. At the same time, we value the opportunity for single-gender spaces, especially with our teens. Our young adult counselors are well-positioned to be role models and provide guidance to campers who are developing their identities as young people. To be with others experiencing similar challenges and joys around growing up can be an important factor in youth development. We value our girls’ and boys’ cabins and do not plan to eliminate this element of our program.

While we value single-gender experiences in our cabins at camp, some of our campers identify differently than “boy” or “girl.” In order to offer a gender-identity affirming experience for all campers, we will offer a cabin for campers who identify outside the gender binary where they can be with campers and staff members who also identify outside the binary. Some campers might describe their identity as “non-binary,” others might use terms such as “a-gender,” “gender-non-conforming,” or “genderqueer.” An umbrella term used by many engaged in our society’s work for gender justice and inclusion is “gender-expansive.” We hope that by offering a gender-expansive cabin option, campers who are often targeted by misunderstanding or forced to conform to gender expectations not true to who they are will be able to fully be themselves in a safe and supportive space. 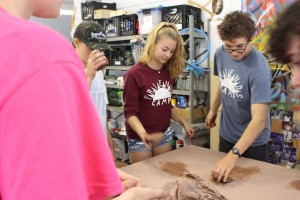 This cabin is an option open to all interested families, even if your child doesn’t identify as gender non-binary. Any camper who feels like this cabin would be the best place for them is welcome to stay there. Of course, campers and families need to make a decision about which cabin will be best for them together. You can answer your cabin preference as you sign up for camp, and you can change it up until 2 weeks before camp by contacting Anna at director@friendscamp.org, or 207-445-2361.

Is the whole idea of non-binary gender identity or gender expansiveness new to you? That’s okay! According to www.genderspectrum.org, gender-expansive is an umbrella term used for individuals that broaden their own culture’s commonly held definitions of gender, including expectations for its expression, identities, roles, and/or other perceived gender norms. Gender-expansive individuals include those with transgender and non-binary identities, as well as those whose gender in some way is seen to be stretching society’s notions of gender.

Thanks to all those who support Friends Camp and our campers! We can’t wait for Summer 2019!!!