This summer we welcomed the inaugural group of Rising Leaders, counselors in training who joined us during Jones session. The Rising Leaders were guided by returning staff member Danny Raeder as the Rising Leader Shepard. Danny shares more about the program below: 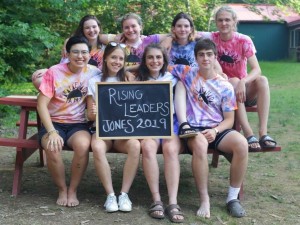 The program was designed with the intention of both creating space to honor the growth that campers do here, by allowing for them to step into the role of steward-leader, as well as giving a glimpse into the work we as staff do to create magic here at camp. Particularly, we wanted Rising Leaders to be able to learn more about Quaker leadership, experience working with our youngest campers, and most importantly find their own strengths as a leader with guidance and support.”Every summer brings new songs, new friends, and new traditions here at Friends Camp, but this year we had a whole new way to engage camp with the introduction of our Rising Leader program! Eight young leaders in their final year of camp had the opportunity to come during Jones, our youngest session, to see what goes into being a staff member and what leadership means in the Friends Camp community.

As a cohort, the Leaders had daily conversations about leadership and the process of creating a camp experience. 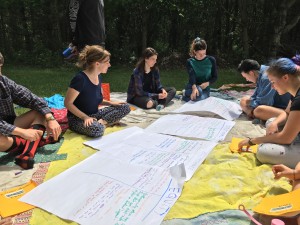 These morning sessions were largely discussion based, co-led by the Leaders and myself, as well as guest speakers like Nia Thomas, the New England Yearly Meeting’s Quaker Practice and Leadership Facilitator, and our very own Anna Hopkins. The Leaders also used this time to brainstorm and plan elective activities for campers that they independently led each afternoon.

Additionally, living in the cabins with campers and a mentor counselor, Leaders became an integral part in the creation of the small cabin-family communities that are the building blocks of the Friends Camp experience. They had the chance to put into practice everything from helping a camper move through homesickness to the logistics of putting eight 10 year olds to bed each night.  In this capacity, they had hands-on experience that then informed our daily meetings topics and reflection time.
I found myself in almost constant admiration of the bravery these 16 and 17 year olds had in diving head first into uncharted waters and their ability to lean into the learning. No amount of preparation could have gotten us ready to know what Rising Leaders was going to look like, but together we discovered what this program needed and what it needs to be. When daunted by uncertainly or self-doubt the Leaders showed great wisdom in their discernment and their ability to step up as each other’s supports. 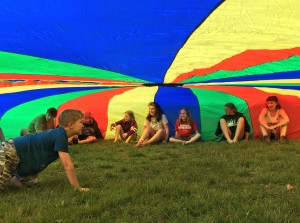 It was truly an honor to be able to be the Shepard for our first cohort of Leaders. I look forward to the continued unfolding of the Rising Leaders program and hope that we have begun a cycle of community care and a space for campers to grow into new roles here in the community.”
Read more about the Rising Leaders Program here— the first deadline to apply to be a 2020 Rising Leader will be December 1st, and all the details for this coming year will be posted in early October.
Anna Hopkins2019-09-26T18:26:28+00:00